We have a new bird cross-stitch pattern, this time a big one. It’s a Wood Grouse, which is also called Western Capercaillie, or Heather Cock. It is the largest member of the grouse family. Male and female Capercaillie birds can be individually identified easily by their size and colouration. Our pattern presented a male. 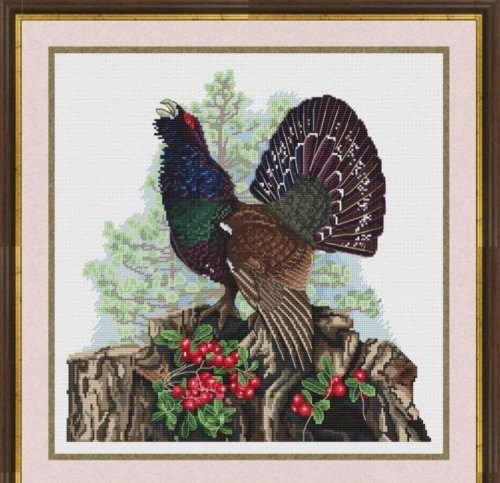 At one time it could be found in all the taiga forests of northern and northeastern Eurasia within the cold temperate latitudes and the coniferous forest belt in the mountain ranges of warm temperate Europe. In Norway, Sweden, Finland, and Russia their populations are large, and it is a common bird to see in forested regions. However, the Scottish population became extinct, but has been reintroduced from the Swedish population; in Germany, it is on the “Red List” as a species threatened by extinction, so it has not been hunted in Scotland or Germany for over 30 years.

Singing during breeding season is probably the most interesting thing about Wood Grouse. It starts according to spring weather progress, between March and April and lasts until May or June. At the very beginning of dawn, the tree courting begins on a thick branch of a lookout tree. The cock postures himself with raised and fanned tail feathers, erect neck, beak pointed skywards, wings held out and drooped and starts his typical aria to impress the females. The typical song in this display is a series of double-clicks like a dropping ping-pong ball, which gradually accelerate into a popping sound like a cork coming of a champagne bottle, which is followed by scraping sounds. Towards the end of the courting season, the hens arrive on the courting grounds, for “play”. The cocks continue courting on the ground: this is the main courting season. (From https://en.wikipedia.org/wiki/Western_capercaillie).