The ancient Egyptians are the first people to leave extensive evidence of their alliance with domestic cats—an affiliation that developed at least 5,000 years ago, according to Egyptian writings and statues (one of them – the Gayer Anderson Cat I saw in  British Museum last year). These domestic cats became beloved household companions, and then sacred animals associated with the gods. 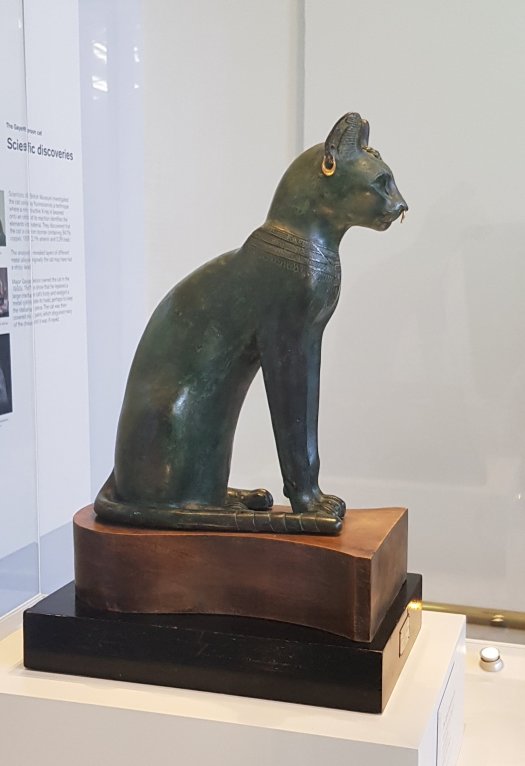 And this is our Egyptian Mau Cat for cross stitch:

While some people might at first be attracted to the Egyptian Mau’s beautiful spotted coat, most become fans due to the breed’s temperament and personality. Maus, like their ancestors that were invited along on the duck hunts of their Egyptian companions, love to fetch. In fact, they love any play activity that mimics hunting behaviour. Indoor-only Maus, the only kind recommended by most enthusiasts, will sometimes leave gifts of well-killed catnip mice on the pillows of their favourite people. Be sure to give your Mau lots of pettings and praise, and perhaps a treat or two, for these presents; Maus will be upset, and quite confused if their generous gifts are coldly rejected. While not overly talkative, Maus will let their humans know if something is amiss, particularly if that something concerns food dishes. Their voices are usually melodious and quiet. When engaged in conversation with their human companions, Maus wag their tails, tread with their feet, and make a variety of sounds that fanciers call “chortling.” Maus are devoted to the humans who pay them the proper homage. If you show your Mau you can be trusted, your Mau will shower you with love and loyalty. They are fiercely loyal cats who generally don’t take to strangers. Once they bond with their preferred persons, they want to be worshipped by their chosen family rather than by the entire human race.